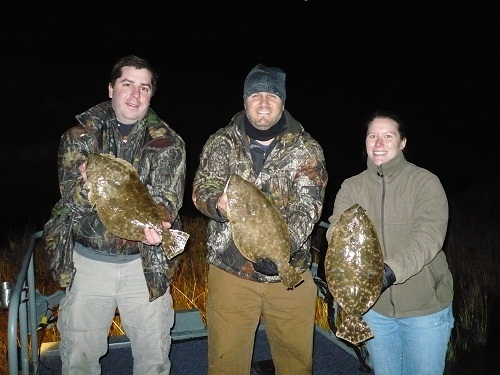 Last week the Galveston weather couldn’t seem to make up it’s mind.  We had a couple days that seemed like we were in the middle of May with warm conditions, then the next thing I know it is 42 degrees after one of my gigging trips!  The high southerly winds that we had before the northern front came thru pushed all the water one way, then the 30+ mph north winds really turned the bay over and the water clarity paid the price.  I guess it is nature’s way of protecting the flounder 🙂  Anyway I had a charter Friday night with Phil, his wife Raquel, and 7 year old son George.  I suggested we reschedule, but the Phil just really wanted to get out on the water for the evening.  The weather conditions were really nice for gigging with light winds, but the winds we had experienced the two days prior really hindered our efforts.  It was almost like trying to gig in chocolate milk…. no more like chocolate syrup.  It was muddy!  Phil, Raquel and George had a good time considering the conditions.  Little George really enjoyed catching the minnows and mullet that were attracted to the lights with a small bait net – it kept him occupied and interested.  The stereo that we recently installed in the flounder gigging boat came in handy to turn a not so good flounder gigging trip into a real nice evening.  A little bit of Jimmy Buffet, and a couple adult beverages Phil brought along made for a nice evening on Galveston Bay.

Saturday morning I went out looking for some clear water that we could gig flounder in for my Saturday night gigging charter.  I found some decent water.  It was in an area that I haven’t tried since December so I wasn’t sure if the fish were there or not.  I let my customers know the situation, and offered to reschedule since the conditions were not good for the areas I knew were holding fish.  They decided “lets give it a go”.  They were glad they did, and we gigged some nice flounder.  We saw well over 30 flounder, but some were questionable as to rather they would make the 14″ minimum length.  Another great flounder gigging charter on Galveston Bay.