Last Chapter for a Man who loved Fishing – Del Turner 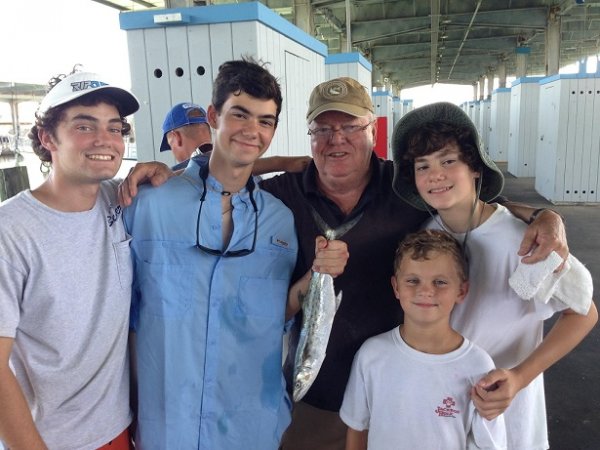 August 13th I had the pleasure of taking Mr Del Turner on a fishing trip with his Son Kurt, and his 4 Grandsons.  He had called me a week or two prior and was excited because he could tell thru our website that we were family and kid friendly.

We had a great day on the water, and Del was passionate about fishing, was obvious that he loved being on the boat with his son and his Grandsons. He was called ‘Popi’ by his Grandsons, and it was obvious he loved sharing the day with them. He was a pleasure to have aboard, had a great sense of humor, and we had a great time, and told some great stories.  The last “hook up” of the trip we had to pull anchor and chase what Del was hoping to be Bull Red… well it was a Giant stingray – but still fun. That evening after our trip he left a great review on our site https://fishinggalvestontx.com/reviews/best-day-ever-we, and had told me he wanted to book a fish-gig combo this fall.  I was looking forward to having Del aboard again.

Well this morning I learned this news about a great guy.  If  I could plan the way I intend to leave this world and enter into the next…. This is a story book ending… and he hooked up with the Bull Red he was wanting.

All who live near the water love a good fish story.

The old man drove his truck to the beach, arriving just before
the sun came up. He was going to meet a good friend, and they were going to
fish together as they’d done many times before.

His friend planned on meeting him after church, so the old man
didn’t wait. In his 70s, he moved slowly and methodically as he took his well-organized
gear from his pickup. As he walked slowly across the sand, the sun was just
starting to appear.

He had to notice the beauty of the day. The sun reflected off
the green water, the waves were clean, the sky was clear, and a soft, cool
breeze blew from the northeast.

He waded into the surf, and another fisherman nodded and waved.
The two fished near each other for some time until the other fisherman went in,
leaving the old man to enjoy the day on his own.

I imagine he enjoyed it quite a bit. As with most fishermen,
fishing in itself is only part of the equation. Fishing gives you a great
excuse to put yourself in a place and time that allows you to feel connected.
To feel the bliss and even awe in those beautiful moments the world gives us if
we’re open to them.

Of course that awe and bliss are exponentially heightened if you
land a big one in the process!

Two women were enjoying a morning stroll along the beach front,
talking and enjoying their own moment in the early morning beach environment.
They came across a man floating close to shore face down. They pulled him to
shore with the help of another man who was near. They started CPR and called
911.

The Galveston Fire Department was first on the scene, followed
closely by the Galveston Island Beach Patrol, Galveston Police Department and
Galveston EMS. Care was transferred, and advanced life support measures were
undertaken on the beach and in the ambulance on the way to the hospital.

Two days later in the critical care unit, his family made the
decision to take him off the machines after learning he’d had a massive heart
attack and wouldn’t ever recover. The same machines had bought some time for
them to get there and go through the process of making the decision together on
their own time — as a family.

In more than 30 years of working for the Beach Patrol I’ve seen
many, many people die. I’ve spent untold hours with families making difficult
choices or coming to grips with what seemed to be insurmountable new realities.

I can say that there are good deaths and not so good ones. Dying
while doing something you love so much at that stage of your life is about as
much as any of us could hope for.

Oh, and the best part. Two days later, his rod was found a
couple of miles away. It was connected to a 50-pound redfish.